Located at the midpoint between Vancouver’s bustling Davie and Robson Villages, Ole Scheeren’s design draws inspiration from the texture and scale of the surrounding urban fabric and folds the typologies of the two historic villages from the horizontal into the vertical, creating carefully articulated twin towers that integrate into the local neighborhood. Dubbed ‘Barclay Village’, the project merges a diverse mix of residences with public amenities, communal spaces and a network of green areas that extend to the building’s top floors. 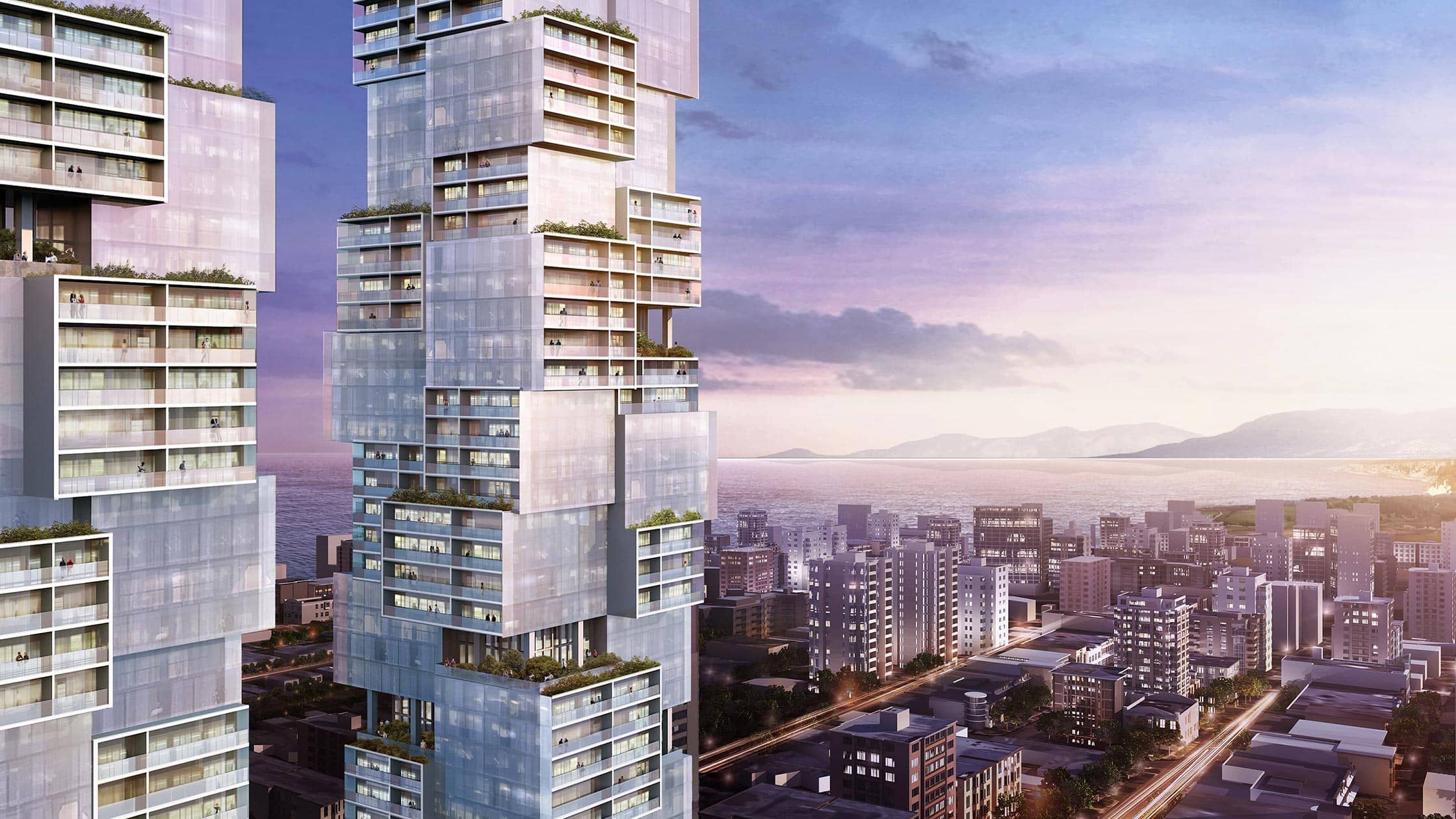 Commissioned by Bosa and Kingswood Properties, the development uniquely integrates social housing, market rental and condominiums for sale in a residential complex that goes beyond the stratified apartment block and offers a multitude of shared spaces for social interaction.

Ole Scheeren says: “Whereas tower typologies by default reinforce isolation and division, ‘Barclay Village’ proposes a design that becomes an extension of the local neighborhood and community and that opens up the confines of the tower to reconnect architecture with its natural and social environment.

‘Barclay Village’ is embedded in Vancouver’s lively West End, an area characterized by a range of small and medium-scale structures and a patchwork of dense green spaces. The design of the project reflects this heterogeneous urban context by stacking cubic volumes of varying size to form two modulated towers with a distinctive silhouette. The volumes are offset to create multiple receding platforms, balconies and terraces that resemble the network of diverse small-scale spaces at street-level.  ‘Barclay Village’ creates a living experience in a high-rise comparable to that of the surrounding neighborhood, affording both private residential spaces and a variety of communal areas for social connectivity. 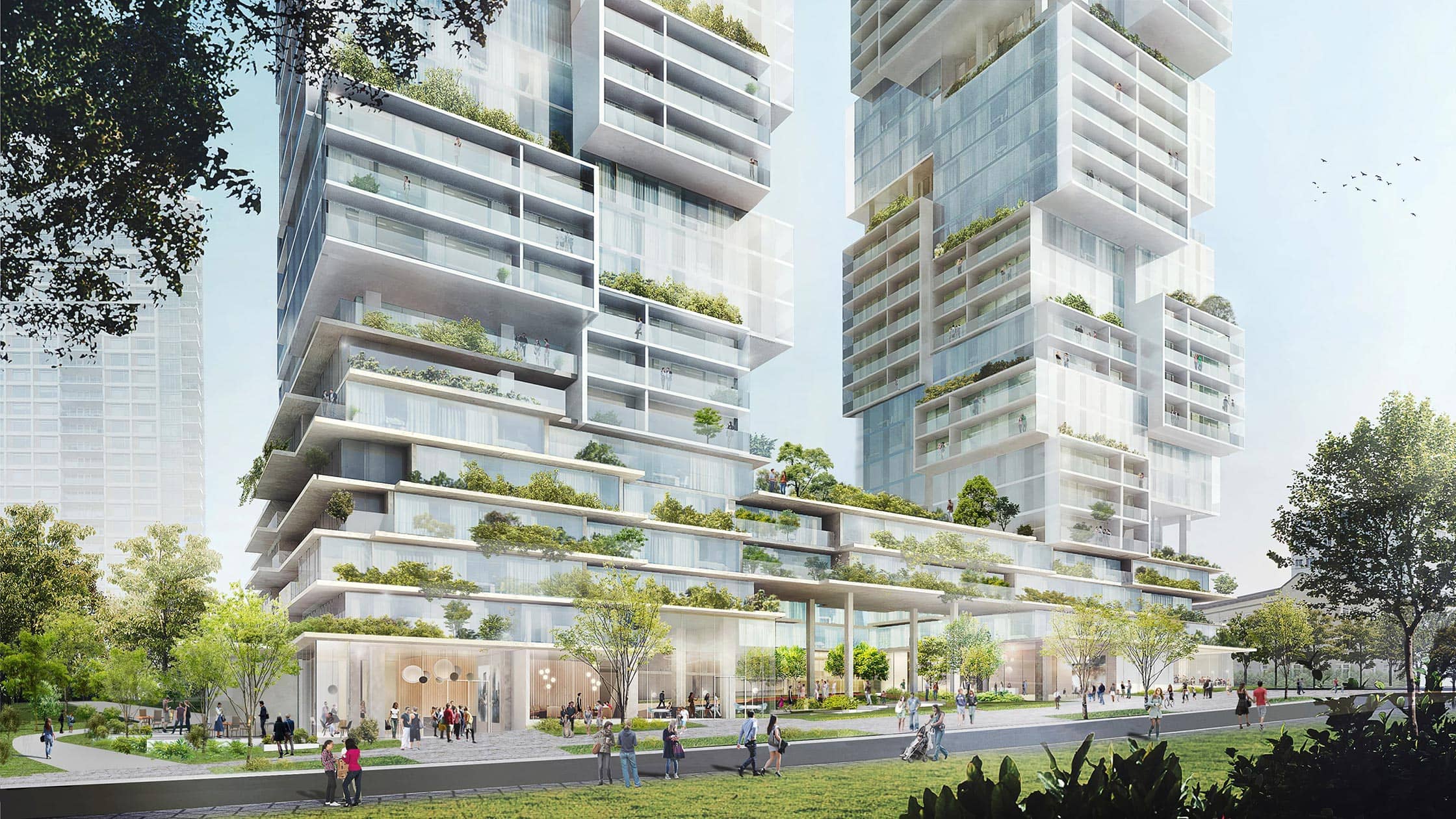 The twin towers are not conceived as separate entities but are closely connected with each other and the natural and urban spaces around them. Above the ground levels, a multi-layered bridge physically joins the two structures and creates a semi-internal courtyard that is both protected whilst remaining open to the street. In contrast to the typical tower base with hard street edges and limited access, the design for ‘Barclay Village’ proposes a softer, permeable approach with a series of receding plateaus that allow the surrounding greenery to overgrow them and fuse the structures into the streetscape.

“Through the integration of nature on the various terraced spaces of the twin towers, we are extending the typology of the ‘tower in the park’ defined by Vancouver’s West End Plan through the idea of bringing the ‘park into the tower’” says Ole Scheeren.

The space between the towers is precisely defined rather than merely residual, with the various ground level amenities – lobbies, gym, retail and recreational facilities, as well as a daycare center on the upper levels – spilling into the courtyard. Open terraces and sky gardens extend the landscape from the courtyard and connector levels upwards into the towers, populating the residences with outdoor green spaces.

‘Barclay Village’ will mark Büro Ole Scheeren’s second project in Vancouver after the unveiling of 1500 West Georgia in 2015, now rebranded as ‘Fifteen Fifteen’, a residential tower in a pivotal location of the city whose distinctive design reaches out to engage the surrounding city and nature. It also further expands the practice’s portfolio of innovative, socially and environmentally sustainable residential projects, including The Interlace in Singapore, which was awarded the Urban Habitat Award in 2014 and named World Building of the Year in 2015.